Back in the Saddle

Back in the Saddle 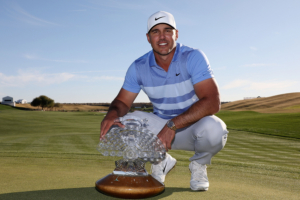 SCOTTSDALE, ARIZONA – FEBRUARY 07: Brooks Koepka of the United States poses with the trophy after winning the Waste Management Phoenix Open at TPC Scottsdale on February 07, 2021 in Scottsdale, Arizona. (Photo by Christian Petersen/Getty Images)

What an incredible weekend in sports!  Super Bowl Sunday is always a “must watch” as the two championship teams compete for the ultimate prize of being the world champion and ultimately one team losing the game and their championship accomplishments are lost as well.   Interestingly is how this compares to the many golf enthusiasts who tuned into the other “must watch” sporting event prior to the Super Bowl viewing many of the world’s best golfers compete at the PGA Tour Waste Management event in the desert that always provides birdies & eagles down the stretch to determine the winner, and this year events had numerous champions that were looking to get back into the winner circle.  Was it fitting that a guy built like a linebacker got it done?  Brooks Koepka showed exactly what he’s made of: process, training and stepping up when it’s needed during the round. Despite not making cuts in his previous starts, there was no self doubt in his skills as he was quoted that “I’m feeling stronger & I’m improving from where I was the previous week” and when it came down the final 9 holes it was without a doubt who was the best player on the course.   When the shot was needed, he stepped up and reminded us all that; that dude is the man!  Congrats Brooks!

About the Author: Josh Snider